How To Massively Improve Your Odds Of Making Good Decisions 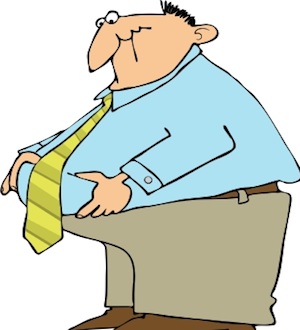 After the controversy of my last post ‘This Was An Interview With Robin Sharma‘, it’s time to get things back on track round here today with some serious Life Coach type stuff.

I’m pretty sure you get strong gut feelings or intuitions from time to time. A sense from deep within that a decision you’re about to make is either right or wrong.

I’m equally sure that you override that feeling at least occasionally, and then wonder what the hell they were thinking of afterward and berate yourself accordingly.

But you really shouldn’t be tough on yourself because it’s not your fault. It’s actually your prefrontal cortex getting involved in something, that’s quite frankly, none of its damn business.

The rest of your brain is a beautiful and highly efficient thing. It has evolved over thousands of years and knows a thing or two about life. Your prefrontal cortex, not so much.

I recently heard a brilliant analogy that will give you a clear idea of the difference between your conscious and unconscious mind.

If you think of your conscious mind as being the change in your pocket, and your unconscious as the wealth of the US economy (before the financial collapse), you get a fairly accurate idea of the imbalance of power between the two parts of your brain.

Note: If you want to know more about that and why multi-tasking is a myth, check out my post Cannabis Is Better For You Than Multi-Tasking.

What happens prior to you having a strong gut instinct is your unconscious mind moves into rapid cognition. It does a load of nifty calculations, weighs up the odds of success versus failure and then sends you the appropriate signal.

It then sits back relaxed in the knowledge it did its job and now it’s down to you to use the information wisely.

Unfortunately, even though it has massive computational power, your brain is also a bit like one of those huge old super-computers from the 1970‘s. You have to know what the data it spits out means because it can often be open to interpretation

A gut feeling really can be a gut feeling, or it can literally be a stomach ache brought on by eating a dodgy chili at the hole-in-a-wall Mexican the previous night. And that’s partly the reason so many people don’t trust their gut as much as they could do.

The other reason is some people struggle to know the difference between a gut feeling and wussing out from a tough decision.

You’re chattering away to yourself like a demented Gibbon 24 hours a day, 7 days a week.

If you doubt that, close your eyes for a moment and focus all your attention on your breath. Unless you’re an experienced meditator my money says you can’t go 5 seconds without a thought (and thoughts are language) popping into your mind.

That’s not a problem though, it’s just what your mind does to get you through the day, and anyway, we’re all as nuts as each other when it comes to self talk.

However, an internal conversation is not the same thing as a gut feeling. The reason being is that gut feelings don’t usually come in the form of spoken language, they are almost always kinesthetic, or at least start kinesthetically.

The following internal conversations are almost certainly not gut feelings

They are conversations stemming from your wussy conscious mind that’s getting all fearful about being dragged out of its comfort zone and it’s trying to con you into thinking you’re about to make a bad decision.

How Do I Spot A Gut Feeling?

My guess is that unless you are very academic and left brained, you’re already way better at spotting them than you give yourself credit for. You may ignore them because of the reasons I just explained, but that’s not the same thing as not spotting them.

If you’re a very analytical and/or academic person, it’s a very different matter altogether though. What’s likely to happen is that when you get the feeling you will bury it under a shit storm of logic that makes sense at a conscious level, because that’s what you’ve trained yourself to do.

Sometimes you luck out and your conscious analysis aligns with your intuition and you get to make the right decision. However, when it doesn’t you will find it incredibly difficult to ignore your conscious mind. It can be done, but you’ll really have to work at it.

Whether you’re left brained, right brained or lame brained, what I want you to do now is to think of a handful of occasions in which you had a strong gut feeling that turned out to be correct

Now I want you to look for common denominators.

The more information you gather at this stage the better equipped you’ll be to spot the next gut instinct you have because they have a strong tendency to replicate one another.

If you can’t remember in any detail that’s cool, because you get to track your gut feelings from here on in and really get a glimpse into your own psyche and what makes you tick.

Once you have as many details as possible, you’re ready to spot your next gut instinct, but you really do have to pay attention.

When you get that sense that somethings either right or wrong, see if it measures up to previous occasions. And if it does, go with it!

Your intuition can be wrong. Indeed it will be wrong from time to time. However, it’s wrong a lot less often than your conscious mind so sticking with it is simply stacking the odds in your favor and that’s never a bad thing.

I’m, keen to know whether you have strong gut instincts, and more importantly, if you do, do you listen to them?

Note: If you want to know more about rapid cognition and how your brain works, the two best books I’ve ever read on the topics are ‘Blink’ by Malcolm Gladwell and ‘Your Brain At Work’ by David Rock. (AL)

Note 2: I used the terms conscious mind and prefrontal cortex as though they are one and the same. That isn’t technically true, but they are close enough to make the point.