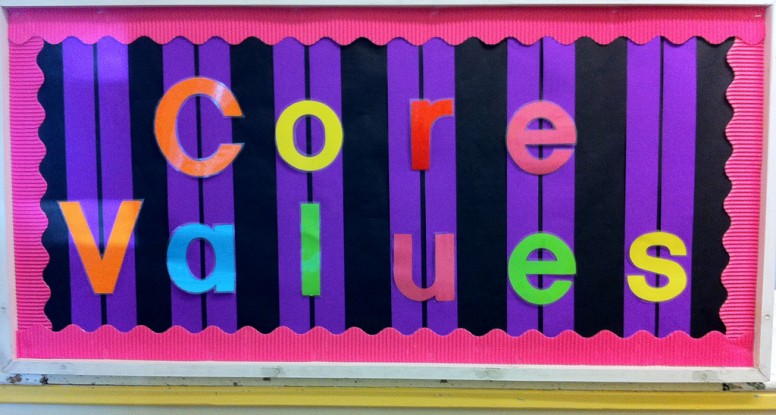 How To Get Motivated Using Core Values

I probably do the values exercise with about 95% of my clients and as a rule, they love it. However, they’ve usually paid hundreds of dollars for life coaching and as such they are heavily invested in and committed to the idea of self development and improving their life.

Getting that kind of buy-in from the average blog reader exposed to “7 Guaranteed, Killer Ways To be Happy For Every Second of Your Entire Life Even When A Doctor Is Shoving His Gloved Hand Up Your Arse” kind of posts is a tad trickier.

Now I’m pretty sure you’re not one of those instant gratification type people, but if you really want to know the potentially huge payback that knowing your values can offer before you commit to it, scroll to the bottom and read on from: How Can My Values Motivate Me?

Then if you ‘re pumped to realize things don’t have to stay as they are (unless you want them to that is) you can schedule an hour out of your busy calendar and start from scratch by reading “What Are Values?” and then ‘What Are My Values?’

Presuming you have read parts 1 and 2 of this series you will now have two sheets like this one, with 8 core values on the one and 8 anti-values on the other.

Rather than explain in writing how to use the matrix, in a moment I want you to check out a demo I produced for the lovely people that bought How To Be Rich and Happy.

I want you to move through the process quickly and tap into your unconscious mind. If you’re taking more than a second or two to record your answer you’re slipping into an analytical mindset and quite probably thinking what your answers should be, rather than what they are.

Now go and watch the video, don’t tell John I gave you our highly secret squirrel link and I’ll be waiting for you when you get back with your newly formed list of values.

Ok, so you have done that, haven’t you? I’m trusting you, and if you haven’t I will feel compelled to slaughter the cutest bunny rabbit I can find and drink it’s sweet warm blood as punishment. So don’t say I haven’t warned you.

The first question is, are you surprised by your list?

That may seem a weird question, after all they’re your values and you ordered them, so why on earth would you be surprised by them?

The honest answer is, I have no idea. But what I do know is that at least half the people I do this exercise with are indeed surprised to some extent.

I frequently hear comments such as, “Wow I never expected ‘X’ value to be so high” or “I really thought ‘Y’ value was more important to me than that.”
The process you used to order them was very basic, but like a lot of basic things, very effective. By comparing them head to head you remove the risk of getting too analytical and it is likely to be way more accurate than you staring at the entire list and trying to sort it out en masse.

Having said that, the chances that you’ve nailed your top 8 values in exactly the right order first time are slim. Although you should be very close and certainly close enough to give you a better understanding of yourself and what’s most important to you.

As you look at the list, does it feel right? Is there anything you think may be missing?

If you come up with a word that you suspect should be on your list simply compare it with whatever is at #8 and ask yourself if it’s more important. If it is do the same thing with #7 and keep working your way up the list until you find its slot.

How Can My Core Values Motivate Me?

We’re really into the meat of this now. Yes it’s taken a while and I’m thankful you’ve stuck with me, but this is where you get the payback for your dedication to do stuff most people can’t be bothered with.

I said in the first post that I was going to explain what value conflicts are and to do so I have filmed two short videos.

In the first one I explain what an external value conflict is and why Enron set a great example for the purposes of understanding this.

In the second one I explain what the trickier to spot internal value conflict is and why they can cause you to get stuck with decision making.

So off you got to watch those and I’ll be waiting for you when you get back.

If you have done that you are now part of a tiny group of people wandering around this planet who actually know the hierarchy of their values. You also have a clearer idea of why and just as importantly importantly where, there maybe sticking points in your life.

That in and of itself it’s well worth having, but as crap Irish comedian Jimmy Cricket used to say, there’s more.

There is a good chance you found one side of the process easier to do than the other. Maybe you skated through the anti-values, but got bogged down with the core values or vice versa?
This is going to give you an indication as to whether you are motivated by moving towards things you want, or away from things you don’t want and this is incredibly useful.

If that isn’t the case, no worries at all because everything is good in this process.

I’m sure you know of the NLP pain and pleasure principle that suggests every human behavior is either designed to move away from pain or toward pleasure, right?

Well very similar to that theory is the belief that people are primarily motivated by moving toward something they want or away from something they don’t want.

The values process is a brilliant indication of which type you may be as the side that was easier for you points to where your motivation lies.

If both sides of the equation were equally easy (or difficult) it may well be you are sat closer to the middle and your motivation will vary depending on the task at hand.

Law of attraction devotees may want to look away now because you’re going to be apoplectic with what I’m about to say.

If you’re a strongly away from person, how useful do you think it is going to be if you set goals that promise you untold love, glory and riches months or even years down the road?

No mater how much you think of your overflowing bank balance or stare at your vision board with it’s beautiful house and shiny new car on it, it’s not going to inspire you other than at a very superficial level.

I know this is going very much against conventional wisdom, but you’d much better served to think about what you don’t want.

A pink slip from a previous job, a notice of intent to disconnect your electricity or a letter from a potential book publisher telling you, “Thanks, but no thanks” is much more likely to get you stoked.

Similarly, if you’re a strongly toward person and you want to quit smoking, then forget about looking at photos of diseased lungs and imagining your untimely death. Instead focus on a brilliant future playing with your grandkids or running a marathon at age 70.

I’m not saying if you tend to be an away from person that you’ll never be motivated toward things or vice versa because that isn’t true.

As a sales person I was never motivated by big bonuses. That was until I was within touching distance of a monster pay out. Then I turned into a drooling whirling dervish of sales related activity.

Have you noticed I haven’t used the word procrastination, even though I said in Part 1 I was going to offer help with that?

That’s because if you’re highly motivated you’re massively less likely to procrastinate than if you’re demotivated or feeling stuck. It can still happen, but we’re playing percentages here.

I know I’m always offering cop outs caveats and I’m going to end with yet another one.

This whole process is not an exact science.

I know it’s stating the obvious, but values are incredibly personal and I’m offering you generalizations because that’s all I can do without you hiring me as your life coach and us working together personally.

I could have easily write an entire book on values and I have left lots of stuff out that I either think you will know, or don’t need to know to make this work.

Having said that, if you have any questions whatsoever, drop them in the comments and I’ll do my best to answer them.

I’d also love to hear any feedback on the results you get or if you think there are any areas you can help fine tine the process for others.