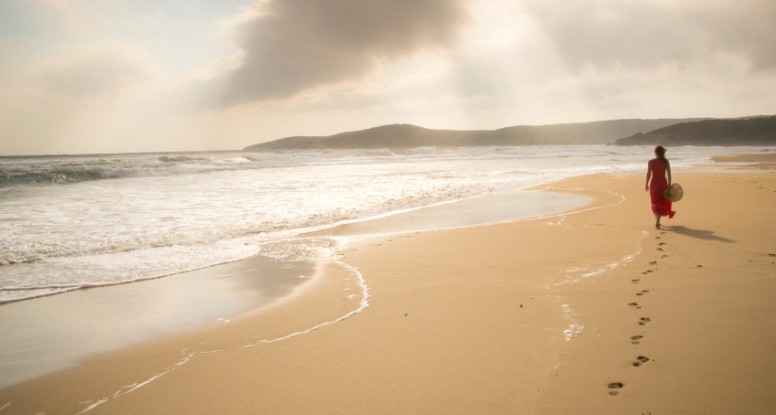 A Walk On The Beach – A Story About Beliefs

You know the really strange thing about life?

It‘s usually shaped in those moments when we’re least expecting it. As I stood gazing out across a deserted Abersoch beach in North Wales, little did I know that a chance encounter was going to shatter my belief system forever and set me out on a path to become a Life Coach.

It was a cool almost cold morning in early December the sky was a slate gray and the thick clouds moved hurriedly across the firmament as though on some life or death errand as the waves crashed against the uncomplaining shore.

I stood at the top of the wooden steps with my hand on the gnarled timber banister and looked across at the ocean drinking in the view. I closed my eyes took a deep breath

I looked at my watch, it was 6.31am and I thought ‘Great, I’ve got at least 2 hours before my wife wakes up and wants to do some holiday type activity that usually starts with shop and ends with ing, so lets make the most of it.

Normally I would have jogged but as I approach 40 I realize that my knees aren’t quite what they used to be and I did have that little twinge in my hamstring the other day, so I decided a walk may be more sensible.

I trotted down the steps and straight into the teeth of the wind. It buffeted me like shoppers at the New Year sales as I made my way across the dunes.

As I came to the edge of the beach I slid my running shoes off and decided to go bare foot. There was no warm powdery sand today, just the heavy feel of cold, newly laid wet clay but I didn’t care, it still felt great.

As I neared the waters edge I spotted a smooth round pebble embedded in the sand. I bent down to pick it up so that I could skim it. I remembered the time I once had a 6er. That’s a pebble that bounces 6 times before plummeting to its watery death. Nobody was looking at the time but I didn’t care, I knew, I’d done it.

The waves were really too high and too restless for skimming but what the heck, I was on holiday. I cleaned the pebble brought my arm back, closed my left eye to take aim and went to hurl the pebble. What the….

Just as I was about to let go I spotted what I thought was somebody out there in between the waves. Then they disappeared as a large wave reached its climax in front of me before crashing down and sending spray into my face and stinging my eyes.  I squinted trying to catch a glimpse of who or what I had seen out there.

Then all of a sudden they were there again and I realized it was somebody surfing. Wow, kudos to him I thought. It can’t be easy surfing in this weather.

Suddenly it hit me harder than a Muhammad Ali uppercut, it was a women surfing and not some young athletic nubile women either, she was 50 if she was a day. I stood there open-mouthed as she rode a wave close into shore.

She bent down about 25 yards out to pick her board up and came towards me. At about 10 yards away I realized I had made a horrible mistake.

She walked up to me carrying her board and thrust out a hand.

“Good morning young man, my names Florence, but my friends call me Flo”

“Pleased to meet you Tim”

At this point I remembered my jaw was still dragging on the floor and closed my mouth hurriedly.

“Wow” I said “That’s amazing, how long have you been surfing and how old are you?”

That came out way too quickly and seemed to emanate from my rear end because I cannot believe I would say something so rude, but she just laughed.

“That’s right. When my old George passed away, god rest his soul, I thought I needed to take up some things that would keep me occupied.  So I made up a list of 6 things I wanted to learn to do. I wanted to be able to sail, skate, ski, surf, scuba dive and knit.”

“Knit? Is that some bizarre extreme sport?”

“No Tim, knitting, as in knit a sweater sweetie.”

“Oh right. So how many have you achieved?”

“All but the scuba diving, which is why I’m here. To learn from a friend of mine that lives just outside the village. She’s a great diver with a lot of experience and an amazing lady.”

She looked at me quizzically and I get my first inkling that this lady didn’t really think like normal people.

I pointed at the sea and then the board, then the sea again and my mouth opened, but nothing came out

We chatted some more and started to wander down the deserted beach as she told me about her white water rafting expedition to the Dordogne in France.

About 15 minutes later we were off the beach and walking down what appeared to be an old farm track when Flo turned and ask me whether I would like to come and meet Alice. That was an offer too good to pass up on.

At the end of the track was a stone built cottage surrounded by an old fashioned dry stone wall. It was the kind of building you see on picture postcards complete with ivy growing thick up one side, leaded windows and smoking chimney.

As we got to the front gate Flo ushered me in and said she was going to put her board away in the garage.

“Just knock and go in” she said.

I did as she suggested and walked into the cottage to see a lady even older than herself cooking breakfast on an old fashioned range. She turned and waved at me as though she were expecting me and boomed in a thick Welsh accent:

“I’m looking for Alice” I said.

At that point Flo walked in and started to laugh.

“Young man, you really are a bit age obsessed aren’t you?”

Alice came over to me wiping her hands on her apron and said, “If truth be known I’m only 85, but don’t tell the locals will you they all think I’m 105 and a Witch I shouldn’t wonder!’

“Pleased to meet you I’m Tim” We shook hands.

You’re very welcome Tim, would you like some breakfast?

The smell of bacon and sausages had not gone unnoticed and I thought it would be rude to say no and I accepted enthusiastically.

“So you scuba dive then Alice” I said with egg running down my chin a few moments later.

“Not as often as I used to, but occasionally when the weather permits and I get time.”

“What else takes your time up?”

“Snapping, what’s that then swimming with sharks?”

Being around these two ladies I’d felt invigorated, inspired and not for the first time, idiotic.

We chatted some more and by now I was not at all surprised to discover that Alice had done a parachute jump only 5 years earlier and that she was an accomplished rock climber in her day. 5 years ago I was lucky if I could manage to jump out of bed never mind a plane, such was my lack of appetite for my work.

Nothing much had changed since then I silently lamented.

Here was I a 40 something in a semi-fit state and already thinking that I needed to start slowing things down and that my dream of leaving sales and working as a Life Coach was just that, a dream.

And here were 2 ladies with a combined age of 161 not even close to being as physically fit as I was and they were speeding things up!

They may not have been as physically fit as I was, but there was one area where they were much stronger than me, and that was their belief system.

Beliefs can empower and serve you or they can limit and destroy you. Mine were definitely on the path of destruction.

Are you allowing your self-limiting beliefs to hold you back like I had been doing?

As I wondered back along the beach I started to feel uncomfortable, not because of the sharp sea shell that was now wedged between my toes although that little sucker did hurt, but because I realized that I had allowed my life to drift and be dictated by circumstances and other peoples beliefs rather than me shaping my own destiny.

Next time you tell yourself that you can’t do something remember this:

Your beliefs determine what you can achieve, not your age, not your family line and not a tweak in your hamstring.

We left Abersoch the next day, but I got up early to jog along the beach beforehand hoping to see the ladies.

My knees seemed surprisingly ok and that hamstring tweak had miraculously disappeared. When I reached the cottage it seemed strangely quiet and unoccupied, there was no smoking chimney, no surfboard or even sign of life .

I didn’t knock on the door, I just got a sense that I wasn’t really supposed to, and anyway I needed to get back home, I had an unrealistic dream to work on.