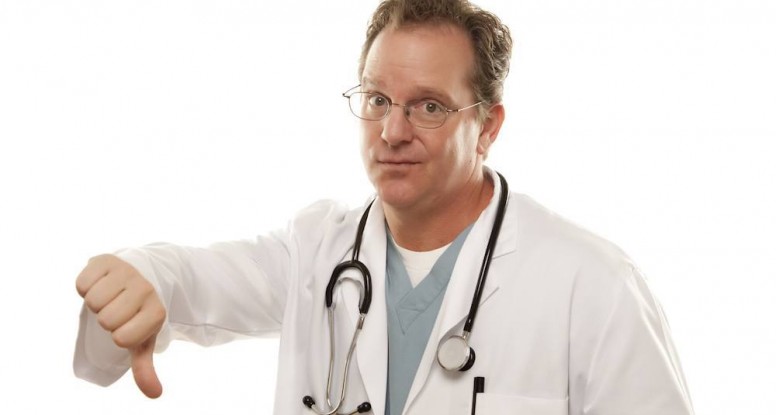 Some Doctors Are Total Idiots

I had an e-mail from a good friend back in England this week who suffers from periodic severe depression.

He has even considered suicide on occasions and whenever he goes missing from Facebook from time to time I worry about him.

He told me he’d been feeling a tad low and his doctor had advised him that with his type of depression there was a 90% likelihood that he would relapse and may become suicidal again.

Some Doctors Are Total Idiots

His doctor is a fucking idiot.

He should be hanging up his white coat and taking a strong anesthetic prior to shoving his stethoscope up his own arse and retiring.

If a doctor had said that to me, I’d have said:

“Show me the research that puts it at 90% because it amazes me how these figure are always so nicely rounded.

Then search for any contrary research that may cast doubt on that, just so I know you are not guilty of confirmation bias from something you read in 1977.

Then show me the research done on people who take their meds compared to those who don’t and whether there are any differences depending on peoples gender, age or socio-economic circumstances.

And then point me to the research on people don’t just give in, but who look to things like helping others, meditation, gratitude journals, exercise and other things we know can help improve mental health.

The Human Belief System Is A Powerful Thing

The power of the human belief system is phenomenal.

There has been a shit load of research on it and it is well known to the medical community – or at least those who can be arsed to follow breakthroughs in science.

By telling him it was 90% likely it would happen again, what effect do you think that would have?

Trust me you don’t need to have spent a shit load of money going through medical school to be able to answer that because my youngest dog just barked, “Brad’ at me.

His English isn’t that great, but I know he meant ‘bad‘.

Can you tell I’m angry and disgusted?

Well dial that fucker up a bit because I’m very angry and very disgusted.

Fortunately my mate is made of stronger stuff than his doctor and he is making the changes needed.

Note: I understand there are some great doctors and my title was inflammatory. My own PCP is one of the most caring people I know, so if you are a great doctor, sorry for the headline and I certainly didn’t mean to offend YOU!

Do You Want To Become A Life Coach?

Tomorrow (Thursday) I am sending out a truly amazing 24-hour offer to my newsletter list for Life Coach training.

And I’m not hyping this up, it really is a great offer – the best I have ever run by some considerable margin.

However, I won’t be blogging about it, so if you’re interested, pop your name and e-mail address in the sign up box in the top right of this page and all will be revealed tomorrow.

At the very least you get 4 cool ebooks for free!

I’d like to to wish all my friends in the US a very happy 4th July and disappear for a few days to celebrate my wife’s birthday and you guys kicking our asses out of the colonies.