Would You Work For Minimum Wage? 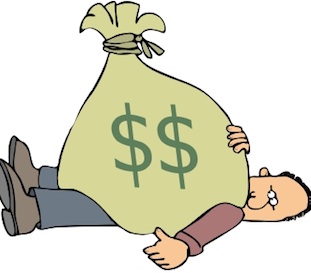 The other day I got into a backward and forward exchange on Twitter with Norcross that was littered with misunderstandings on both sides after I posted the following tweet:

“If you wouldn’t do your job for minimum wage, then you’re probably in the wrong job”

He responded by saying it was a bullshit statement as it’s almost impossible to exist on minimum wage.

Let’s leave to one side over 1.5 million people do indeed survive on minimum wage because that will just muddy the waters. And anyway, I take his point because I really don’t like the thought of anybody having to make do on less than $20k per annum, not in the US anyway.

The precursor to the tweet was a conversation I had with a women at a local Church. I had stopped by to drop off some copies of How To Be Rich and Happy and she started to talk to me about her grandson.

She was worried that he wanted to become a lawyer. I never found out the reason for her concern (although I could make a good guess), but I did ask her to pose him the following question.

“Would you want to be a lawyer if it paid minimum wage?”

If somebody says your product or service is too expensive, you want to know if that’s the real reason they aren’t buying?

It could really be that it’s one of many reasons, or even a false objection altogether. Maybe they just don’t like to tell you it’s because they hate your tie and you stink worse than a skunk after a heavy session at the gym.

By asking the question “Would you buy the product if money wasn’t an issue?” you get much closer to finding out the real reason.

A ‘yes’ means you know finance is the real issue and you can concentrate on that. A ‘no’ tells you that it’s one of the other reasons and you’ve not done your job properly.

If this ladies grandson came back with, “Are you frickin nuts old lady? No way would I do that for minimum wage, what’ve you been smoking’?” you may have a problem.

Firstly, the kid needs to learn some manners and treat his grandma with a bit more respect, and secondly he could be about to embark on a path that may well lead to decades of misery.

A barrage of no’s and dirty looks would let you know the real motivation is money (and/or status) and that kid is in all likelihood going to be unfulfilled in a job he doesn’t love in years to come.

Would I move heaven and earth to carry on doing what I do, even if that meant making huge sacrifices?”

If you answer no to that question, then you may be in the wrong job. Not you definitely are in the wrong job and not you should quit this instant, because there may be some great reasons why you can’t leave.

If you have huge financial commitments to your family then leaving your $250k per year job to become a circus clown may be problematical.

And this is exactly the reason why we want to get How To Be Rich and Happy into the hands of teenagers, to help them make better choices earlier on.

Many people get ‘golden handcuffed’ into their jobs way too early in life because they think money and prestige will make then happy and therefore they chase the jobs that seem to offer both without stopping to wonder if they’ll actually like it.

If you leave school with $250k or more of debt after qualifying to become a doctor or lawyer and then realize that your dream job is really gardening, you’re in a mess because you’ll struggle to ever get the debt paid off unless you’re a bloody good gardener!

I have had a great many clients that were in jobs they hated and very often they’d tell me they were doing it to provide for their kids.

I then usually ask them if they’d have wanted their parents to do a job they didn’t like to provide for them? The answer always comes back something like “Of course not!”

“Well what makes you think you’re kids will want you to do it for them? Wouldn’t you be better serving them by being a brilliant example and showing them that it is possible to have a job you love and not be working 80 hours per week?”

Kids love to model their parents you know!

I would encourage any parent to sit down with the kids on a regular basis from the age of about 12 or 13 and ask them one simply question:

“What do you really love to do and how can I/we support you in doing that?”

No matter how well intentioned that kind of advice is, it’s nearly always crap advice.

Would you work for the bare minimum if you were doing something you really loved? If you have kids, what would you want them to do? I’d love to get your take.