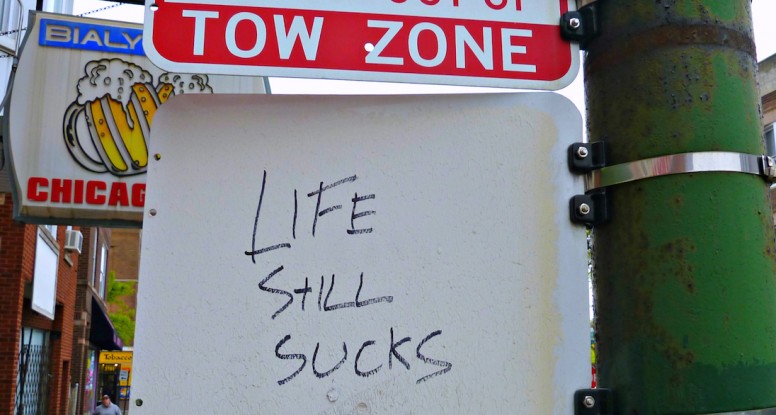 Sometimes Life Sucks – Deal With It!

I have to confess that I can occasionally get irritated by a small group of Life Coaches that seem to want to give the outward impression that their life is absolutely nailed on and they move from one outstanding day to the next without so much as a backward glance.

The reason I sometimes let it bother me is because life doesn’t work like that, for anybody!

We all have shit days, weeks, even months and to try and pretend otherwise is folly and fundamentally dishonest and serves nobody.

I for one don’t want to give anybody the impression that by hiring me I can help make their life perfect.

Neither I, nor any other Life Coach not called Marvin The Magician can do that, no matter how many times we post motivational quotes on Twitter or tell people in our bios “I love life!”

We pretty much all love life and that will be aptly demonstrated if you try and take somebody’s off them.

It’s also why I’ll pretty much talk about anything (Including religion and politics) because I am a LIFE coach.

I’m not a Happy Coach (although I’m usually pretty damn happy), a Delusional Coach or even a Pollyanna Coach. What I do is about life and sometimes life really, really, sucks and there is simply no way around that.

You just have to deal with it and sometimes dealing with it involves talking about it.

Actually that’s not technically true, it did really, really, suck until my wife (Helen) stepped in and pulled a rabbit out of the hat by reframing the shit out of it so it sucked a whole lot less.

Several months ago she started getting headaches and issues with her vision. She has an astigmatism in her right eye and wears glasses for reading and computer work to correct it.

She presumed that as she hadn’t had an eye test for 18 months that that was the issue. She kept promising she’d get her eyes tested when she had some spare time whilst single-handedly raising the stock price of Advil by several points.

A week or so ago things came to a head (no pun intended) when she told me she’d had her current headache several weeks without any relief and that she was also getting blurred peripheral vision.

I immediately kicked into panic mode because that didn’t sound like an astigmatism issue to me and anyway, I panic very well when needed.

Fortunately, being an oncology nurse and working closely with the head and neck team she was able to get booked in for an fMRI the following day.

However, the news wasn’t cheering at all as she had what was politely described as a “deviation of the infundibulum and an area of diminished enhancement consistent with an 13mm x 8mm adenoma.”

In layman’s speak, that means you have a brain tumor.

The ‘enhancement’ was on her pituitary gland which in many respects is good news because it’s very rare for malignant tumors to develop on the pituitary, they’re almost always benign.

However, they can turn malignant and spread if not treated and they can still do a lot of damage, especially to the optic nerve, if left to their own devices.

And that is where we are now, waiting to see if Helen will have to have surgery or whether they can treat it with medication and/or radiation.

Surprisingly enough she wants surgery and that’s part of the reason for this post.

You’d think as the Life Coach I’d have been the one calming her down and reframing the whole situation, wouldn’t you? Well it hasn’t been quite like that, in fact the opposite is closer to being true.

When recently she got absolutely hosed on a promotion because she didn’t have her UK qualifications from High School, she astounded me by coming home and saying:

“Oh well, you don’t have to be a manager to be a leader,”

But she took it to an even level higher with this.

She was had thyroid issues for some while and it now seems like there is a high probability this was caused be the reduced pituitary function.

The thyroid issues led to a host of other related conditions that she has managed with medication, but are a real pain to her.

So Helen has reframed the whole thing as a brilliant opportunity to fix a number of problems in one fell swoop and seems almost excited by it!

Is that about as good at is gets when it comes to reframing and sticking to a positive attitude?

The fact is, as the title of the post suggests. Life does suck sometimes.

You will almost certainly go through illness, lose loved ones, have things go wrong at work, have arguments and days where you wished you’d stayed in bed.

That’s not the issue, the issue is how you deal with it.

There’s nothing wrong with occasionally feeling down for a period of time, that’s part of life and it’s perfectly normal and even healthy and ok for other people to see that vulnerability.

The problems occur when you allow that to continue and adopt a victim mindset and start thinking your crap is worse than everybody else’s crap.

Unless you are literally drawing your last breath as you read this, it isn’t, so deal with it.