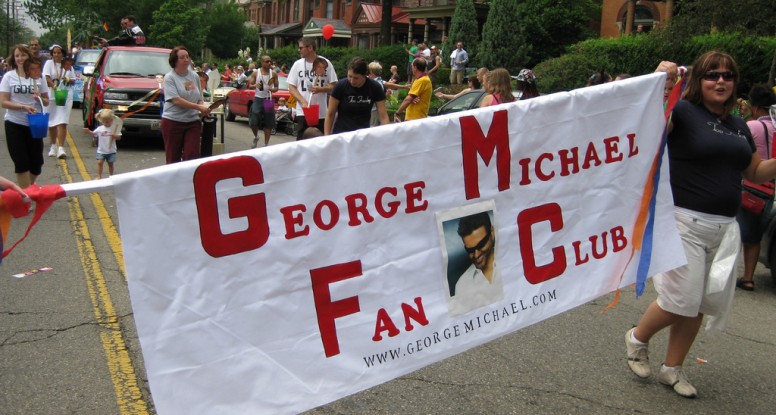 I was floating on a magnificent cruise liner somewhere in the Caribbean Sea. My gorgeous new bride was by my side as I sipped my rather camp, but luscious Strawberry Daiquiri and basked in the golden tropical sun.

With that I put my drink down, lay back and picked up my book and continued to read ‘Take It Like A Man’, the autobiography of Boy George.

And then I was hit by the bombshell.

George what are you saying mate? You can’t possibly print something so obviously untrue and libelous. In my haste to sit up I knocked my drink over and scrambled to stop the red syrupy sweet liquid running over my Walkman, watch and assorted clothing stacked by my lounger.

Helen sat up and looked at me with the kind of look that suggested she was thinking she’d made a huge mistake just a few days earlier.

I stared at her. “You’ll never guess what Boy George says in his book”

“He says George Michael is gay!”

She looked at me more with sympathy now than concern and said “That figures” and lay back down and closed her eyes.

“What? George Michael can’t be gay, he has all those women lusting after him and he writes raunchy lyrics and stuff like that”

She just shrugged her shoulders and said “Yeh, and no doubt he dances around on stage in a white vest with another man because he can’t decide which women to choose.”

At that moment my belief system shifted never to return from whence it came. Boy George wasn’t the lying bastard I had presumed for a few precious moments, he was just telling it like it was.

In hindsight, George Michael was quite obviously gay to anybody that was prepared to see it and he didn’t need to wear a pink tutu to prove it.

And therein lies the problem. We often reject what is staring us in the face because it doesn’t feel, look or sound right. Rather than question ourselves, we question (or ignore)  the evidence and presume it is that that is wrong.

I think it was ‘The Secret’ (but I could be wrong, it may have been ‘What The Bleep Do We Know’) that tells the story of Christopher Columbus, or some other dude that did a lot of sailing, landing on an island somewhere far, far away.

In the reenactment for the movie the natives standing on the beach looking out to sea couldn’t see the arriving ships about to steal all their booty, because they had no point of reference for what a ship would look like.

In other words, they had no ability to see something that they didn’t know existed.

Even though the story is almost certainly the biggest pile of steaming horse crap since somebody once told me Boy George is gay, and begs the rather obvious questions of, “What the hell were they doing stood on a beech peering out to sea in the first place, admiring the view?” It does make an interesting point.

If I asked you to put on a pair of glasses with green lenses and then come clothes shopping with me you’d probably think I was a very weird life coach indeed. But if you were up for a laugh and decided to give it a go, what do you think would happen?

Well, unless your name’s Lenny the Leprechaun you’re going to be a tad frustrated, because everything would appear green.

You can try telling yourself the sexy little dress you’re wearing is black, but your conscious mind is certainly going to rebel (to begin with at least) and say “No it’s actually chartreuse you half-wit, look in the damn mirror?”

If you’re wearing a pair of green glasses and know you’re wearing them, then other than looking a bit strange, worrying about traffic lights and struggling at Trivial Pursuit, life wouldn’t be so bad. You’d simply adjust your behavior accordingly and hopefully avoid driving.

Well the weird thing is, you’re already wearing glasses like that, you’re just not aware of them and thus rarely make the conscious effort to change them.

Yep, your glasses are in reality, your belief system.

It’s doubtful your beliefs are the variety that change the color of everything you look at, but they certainly filter every single piece of visual and aural information that enters your head. And it’s impossible for you to do anything to alter that fact.

I say impossible, and that’s true in a literal sense because even if you banish one belief another one will fill the void and take its place.

However, you can accept they’re only beliefs and not necessarily facts, and treat them accordingly. And by that I mean with a sense of curiosity and a even some skepticism when appropriate.

How cool would it be to accept some of the things you are most sure about could be wrong? I’m, not talking about what your name is or what day of the week it is, but the more fundamental stuff.

Maybe you are worthy after all, perhaps it’s ok to get nervous before a speech or be attracted to people of the same sex? What if your religion is not THE religion or even that there isn’t A religion, or other countries are just as great as yours, or even just as fallible as yours?

Think of the endless possibilities if you weren’t attached to old ideas. Oh sure, many will stand the test of rigorous and open-minded investigation and that’s brilliant because you can then hold on to those, but what about the others?

It’s like having the shackles taken off of your mind as you let go of old beliefs and ideas that don’t serve you any longer.

The anomaly with this is that the starting point is to adopt the belief that it’s ok to adopt new beliefs and more importantly, let go of old ones. And that’s the really tricky bit.

BTW, I had a guest post published this week at old man Truants site. It has lots of swearing and personal abuse in it and you can check it out here if you’re not easily offended. Better still, drop the belief that it’s ok to be offended and head over there NOW!