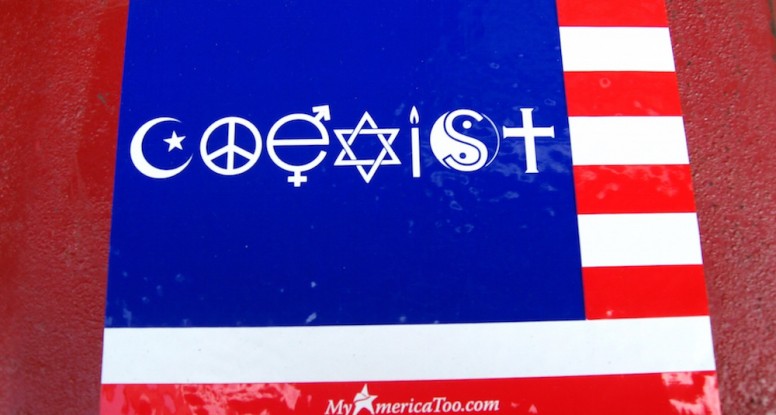 Muslims Go Home And Take Obama With You

Do you know how many times since I started blogging I have had my finger over the publish button and actually been feeling nervous about hitting it?

There have been a few times, such as when I used the ‘f’ bomb for the first time, when I defended gay rights and when I questioned the value of patriotism that I was a tad apprehensive.

The Right To Free Speech

Not that it’s unusual or unique however, as most developed western nations have similar rights even if it’s not always a written constitution.

Nevertheless, there are a lot of countries where that right is denied and speaking your mind can lead to criminal charges and even death if it contradicts the Government or even local religious bodies.

So in large part I think the freedom of speech is a good thing, as I’m sure you do.

Except that is, when it isn’t.

I had an e-mail this week from a Muslim lady who is a coach and concerned about putting her image out on the Internet for fear of a backlash against her faith.

You see she wears a headscarf and as such was concerned she is an easy target for narrow-minded ignorant individuals (my words not hers) who are fearful that Islam threatens their way of life and want an easy target to lash out at.

I get that in ISIS we have a bunch of radical fundamentalists terrorizing parts of the Middle East committing atrocious, appalling and despicable acts in the name of their God.

But by and large they don’t threaten you any more than a rapist living 2,000 miles away threatens you, your wife or your daughter.

Do they need bringing down?

Of course they do, which is why you’re seeing the biggest coalition of Muslim and Christian countries combining in a military effort the planet has ever seen.

Over Half The Worlds Population Are Christian or Muslim

There are 1.6 billion Muslims on this planet, or close to one quarter of the entire population.

There are about 2.1 billion Christians, so between the two that’s about half the inhabitants on earth.

I know many really nice Muslims, in fact I have one in my family.

I bet you know some too and I doubt the ones I know or you know are surreptitiously plotting the downfall of the US in their basement as we speak.

I even feel trite saying that because it’s so obvious and undeniable.

I feel it’s akin to the racist saying, ‘Some of my best friends are black’ as if that in some way means they themselves cannot be racist.

But the point remains, the vast majority of Muslims, Christians, Buddhists, Jews, Hindus and whatever religion/philosophy you care to mention, are peaceful people who just want to be happy and get on with their lives.

People deserve respect, not because they have the same beliefs as us, but because they’re Human Beings. Isn’t that enough?

It’s tough being a human. Happiness and peace are elusive for all of us. 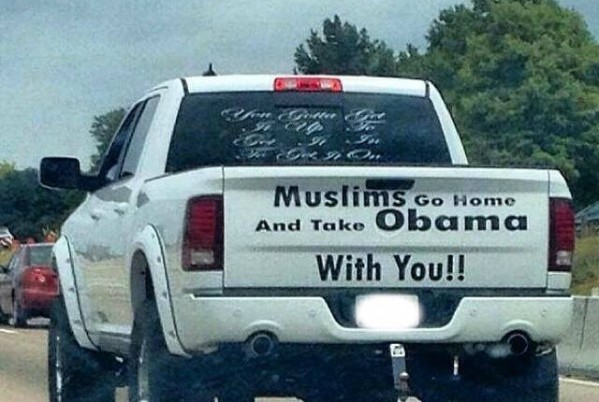 The headline of this post was taken from something written on the back of the pick up truck seen in the picture to the left.

Muslims Go Home And Take Obama With You is what it says.

On one site I read this in response:

“The shocking picture, which insinuates that Obama is a Muslim”

That’s not what’s shocking at all.

Presidents have death threats, dumbass accusations and all sorts of vitriol aimed at them on a daily basis.

What’s shocking is people are blaming an entire group comprising of hundreds of millions of people for their shitty lives because it’s easier than getting off their ass and actually doing something.

What’s also shocking is the moron pick-up truck owner in question is telling millions of people to go home who were actually born in the United States.

Which home are the supposed to go to Mr ‘I have really thought this through’ Genius?

I can imagine a Native American writing on the back of his pick up truck, ‘“Go home invaders and take Obama with you”.

Not that I would be in favor of that, but at least it would make a modicum of sense seeing as America is 99.9% populated by immigrants.

But what’s most shocking to me is this type of shit is not illegal.

Freedom of speech is a right, but when it turns into a hate crime designed to marginalize people and stir up xenophobia and/or racism, that right should be revoked.

When you denigrate millions of people because you’re a scared little man (and let’s face it, it was probably a guy, woman are by and large way too sensible) then you should be ordered to shut the fuck up because you’re making yourself, your family and your country look stupid.

I apologize if the sensationalist headline offended you, but I wanted to drag attention to something very sinister going on.

However, if you started reading thinking ‘I like the sound of this’ then I don’t apologize for letting you down and I advise you to get out more and avoid Fox News.

The connection to self development is loose at best, but I really needed to get this off my chest and I hope you understand even if you don’t agree with my tactics and/or beliefs.