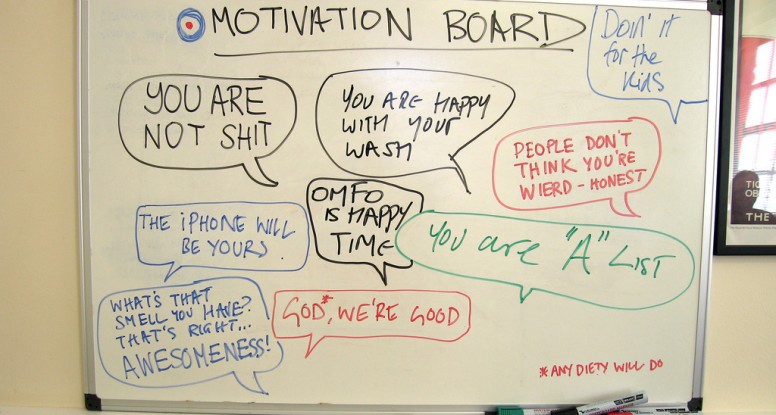 Over the space of the last 5 days opposite sides of my family have seen very close friend pass away.

Neither of the men were young, but nevertheless, neither were expected to leave us this quickly either and they have left behind a lot of grieving.

Earlier in the week I had heard from my publishing agent. She was taking a sabbatical after losing her brother and nephew on K2, one of the worlds most brutal mountains.

K2 isn’t only the second highest peak on the planet, it also has a reputation for appalling weather which can materialize out of nowhere and literally freeze mountaineers to death, blow them off the mountain or bury them under avalanches.

I was talking with my her via e-mail and expressing my condolences, but also hoping she could find some good from such a tragedy. Even if that was merely taking a step back and seeing her own life with a new perspective.

Most of us (including me) run on automatic pilot for most of the time. We can have a tendency to forget how precious life is, how unpredictable and how damn right fragile.

The vast majority of people take it for granted and are just trying to get through the day or get to the weekend, even though none of us know the weekend will even arrive for us.

Statistically speaking, about 1,000,000 people on earth won’t be here in a weeks time to read my next post.

Even though few will care about what I write, It’s still a sobering thought and one that, if you use it properly, can actually inspire you to make the most of your time here on earth.

But just in case you need more inspiration, I’ve got your back! 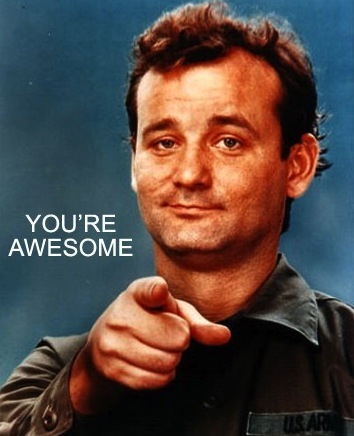 1. You Really Are Awesome – No Arguing!

You probably don’t truly realize what an amazing feat of evolution you are.

You have conquered every adversity life has thrown at you and will continue to do so for (hopefully) decades.

You have adapted to circumstances you’d rather not have had to adapt to, and you have avoided hundreds of opportunities to die on a weekly basis.

You have a brain that even with modern technology can still outwit a computer, It is also way, way, more complex.

And you also have a body that can withstand amazing amount of physical abuse, pain and indignity and still bounce back

You underestimate yourself, but listen to Bill Murray because he’s da man and you are awesome!

2. Just In Case You’re Not Sure What I Meant – You’re Awesome! 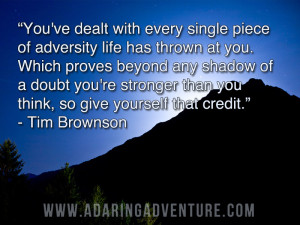 Not even PETA can complain about flogging dead horses, so I feel relaxed in telling you again.

Have you ever seen people who recovered from dreadful adversity and been in awe and thought, “Wow, I could never have bounced back from that”

Well you could have, and more importantly, you would have.

And that’s because, just in case I didn’t mention it, you’re awesome beyond belief.

If you believe in God, then do you think God fucks up?

Right, so you’re awesome then.

Good, because even scientists marvel at the incredibly potential and abilities of the human brain, and if you’re reading this post, then you have one of those. 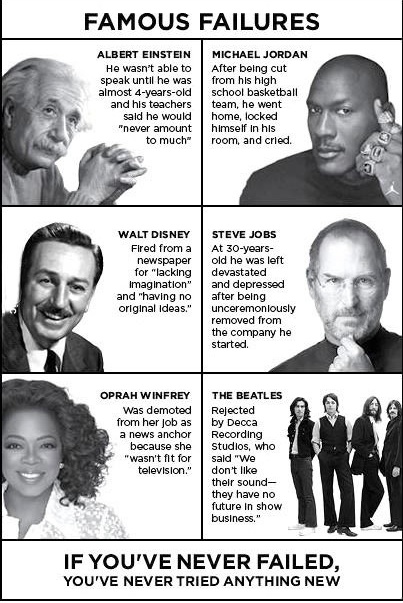 I messed up in my last job.

The partner of my dreams left me.

I failed my exam.

I didn’t make the team.

I pissed off some people by swearing in a blog post.

I’m not gorgeous according to some lame stereotype that Societiy batters me with.

Cool, then believe these people on your left.

Then stop worrying about fucking up, because the worst fuck up is never to risk fucking up.

4. I’m Weird And Most People Think My Ideas Suck 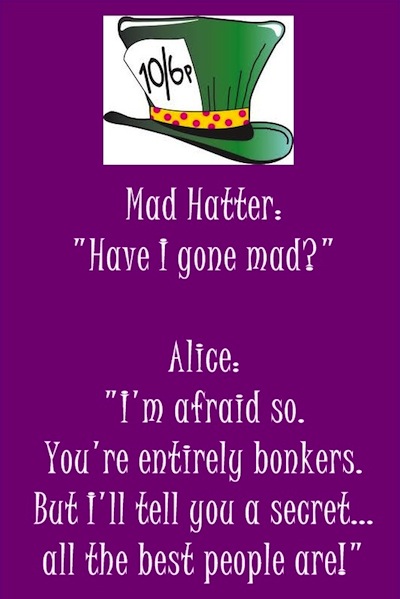 Ok I agree, that’s a problem.

For the people who think your ideas suck.

Now don’t get me wrong I’m not suggesting all your ideas are great, because nobody’s are, but let me tell you of a conversation I had with a manager one time.

It went like this after I had thrown some idea out there (I forget what it was now):

Thanks you with all my heart, Nic Eatch!

Stick with your shit ideas (within reason), because there maybe a diamond inside. 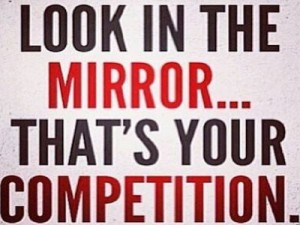 Do you know how many Life Coaches there are out there?

Nope, neither do I, and more importantly, I don’t care.

I cannot influence what other people are doing, I can only concentrate on what I do.

I had a coach try and tell me recently that the most important thing for any new Life Coach to do is research the competition.

I care about my competition about as much as I care what what color hat the Queen wears on her next formal engagement.

You cannot compare yourself to others and still stay in control of your self esteem, happiness and destiny.

There will always be people better than you and worse than you, just deal with it. Or more accurately, ignore it.

Usain Bolt can run very, very quickly, but I bet I can kick his ass at Words With Friends.

Compare you to you and that’s when you will see amazing change and improvement.

Not only that, but you won’t be constantly be worrying about shit that’s out of your control. 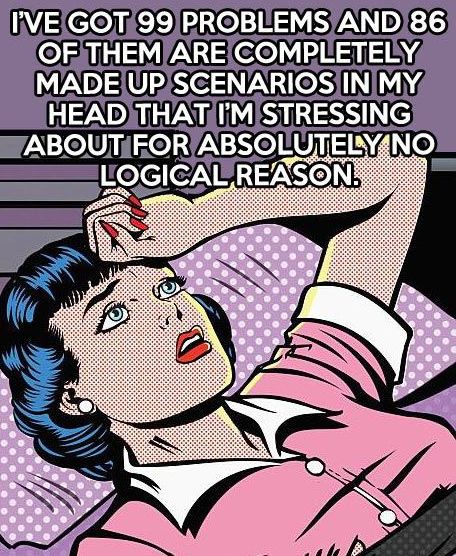 6. But I Have All This Shit To Deal With!

No shit, you have shit to deal with?

Wow, that’s unusual, Ive never met anybody who had shit to deal with before, you’re truly unique.

What is the last thing you worried about?

Did it happen as bad as you predicted?

What about the last 10 things you worried about? How many of those ended up with dire consequences?

The weird thing with realists is that they are realistic about stuff that, for the large part, never happens.

Excuse me for laughing, but WTF!!!!

Is that really being realistic?

Are you being realistic or pessimistic? 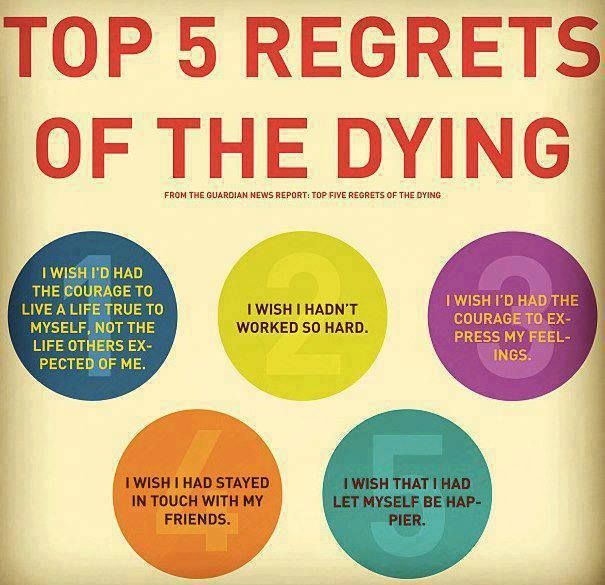 7. I’ll Do It Later I Have No Motivation

There is always time.

There is always tomorrow.

There are always a second chances.

Next week will do.

I can always right the ship later when I have my ducks in a row.

Fuck, where did my ducks go? Who stole my ducks?

Sorry, but they left.

They were actually Geese and they went to Canada and now you’re dead.

I guess you should have done it earlier, eh? 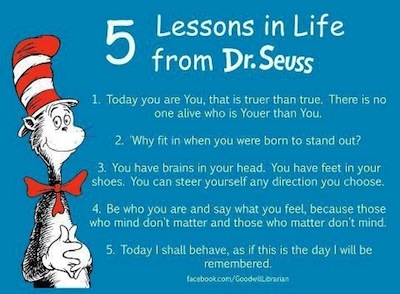 I don’t think I really wanted for anything growing up.

I had loving parents.

I had a stable family home.

I had a roof, shelter and food.

I even had Scooby Doo, Quavers and Morecambe and Wise (UK in-jokes there)

However, I never had Dr. Suess and I should have.

Suess didn’t just amuse kids with quaint rhyming couplets, he educated them with the kind of wisdom, that if I had kids, I’d want them exposed to.

If this quote had come from Aristotle you wouldn’t have battered any eyelid (other than maybe the rhyming part).

That is how true, precise and awesome it is (and yes I am on an awesomeathon in this post).

And one other thing. Seuss understood what neuroplasticity later proved. Cool eh?

9. Are You Part of The Problem Or Part Of The Solution?

I love quoting the latest scientific research that states your happiness levels are dictated thus:

50% is down to your genetics

10% is down to your environment which means finances, where you live and your job etc

A whopping 40% is down to your ATTITUDE!

And one of the reasons I like it is because almost always somebody questions the research.

I then take (almost juvenile) pleasure in pointing them toward it.

Who cares about them because Jack Sparrow got this centuries ago.

Your attitude is EVERYTHING!

If is sucks, change it.

If it doesn’t, cultivate it.

Happiness or a victim mindset?

The choice is yours.

10. This Is Just For Young People 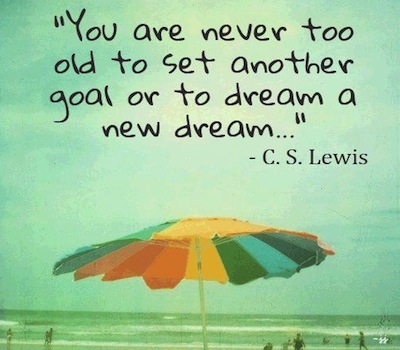 I have no idea how old you are, and quite frankly I don’t give a shit.

I once had a client who was 69 who went back to nursing school.

I had another client who was 78 and running a business if Taiwan and looking to arrange a trip to walk the Appalachian Trail.

And I had another who was 77 and wanted help changing careers!

Your life ends when it ends and not a moment sooner.

Copy your birth certificate and then ceremonially burn the fucker because other than for Government purpose it means NOTHING!

Unless that is, you allow it to. 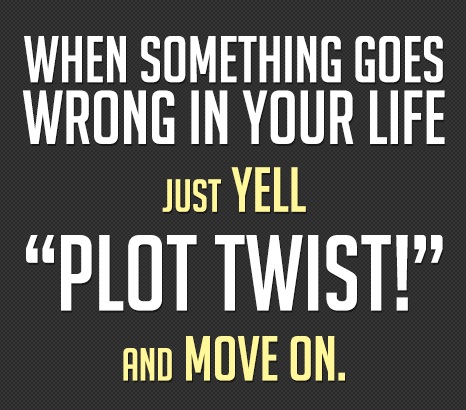 Ignore that question because I know the answer.

All our lives are stories, what else can they be?

None of this shit is real, all of it exists purely and solely inside our own head.

That may sound scary if you are the scriptwriter, but it’s also rather liberating, because you get to decide the story line.

You can cure, berate and bemoan hurdles, hiccups and when things don’t go your way…or…

You can yell, plot twist! And then implement a cunning ploy in the story that makes you out to be an even bigger hero than you already undoubtedly are! 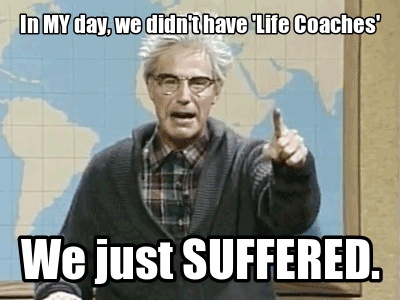 If you’re a guy you may well think you should figure everything out for yourself and you’d be wrong.

If you’re a women you’re smarter than that (by and large) and know that help can be useful, and also that it doesn’t make you any less of a person.

In fact you know the most successful people have a team of others around them who they rely on.

I hope this post gives you the nudge you need to make your own life a page-turning, rip-roaring block buster of a story that future generations will be inspired by.

If it doesn’t then you can always call me to help you make that happen.

In the meantime, please let me know in the comments which is your favorite.