He’s Not A Guru – He’s A Very Naughty Boy 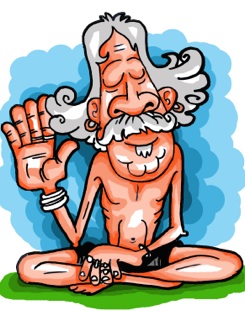 I know it’s not de rigueur to say this at the moment, but I really don’t care for all the talk about building tribes. I even find the term mildly insulting, although I realize it’s not usually meant to be.

I’m also a tad uncomfortable having just set up a Facebook Fan Page because I don’t want fans per se any more than I want a tribe. I’d be much happier if Facebook had a:

I know it’s not quite as snappy, but I for one prefer it.

Let me be honest though, the above doesn’t mean I don’t want a gazillion subscribers to my blog or to sell a gazillion copies of How To Be Rich and Happy or even have a gazillion people waiting to hire me as their life coach, because that would be a lie, I do.

However, I want you and the people that read my stuff, listen to me speak and hire me to be friends, not fans.

The bad news is I’m not a Guru, nor do I have all the answers. I’m just a life coach that has his own shit to deal with, but is also quite good at helping other people deal with theirs.

When I announced my Paleo Experiment I had lots of brilliant comments from people that have done something similar and also a loads of e-mails from people offering support and advice.

The most brilliant thing (to me anyway) is that nobody tried to tell me I was an idiot or this was a foolish thing to do, everybody was supportive and I loved that.

I did get one e-mail gently reprimanding me for my appalling use of language. And I don’t mean using the ‘F’ bomb either, this was much, much, worse than that and the kind of thing that could have the Guru Police coming looking for me.

“We will also be limiting alcohol and removing all candy, cakes, sodas, fruit juices and anything else that tastes nice. I will keep a daily diary recording how I feel and who I want to murder and then I’m going to report back to you with the findings.”

Let me defend myself somewhat, by saying I doubt I really will want to murder anybody and I do realize that there is lots of tasty food out there that doesn’t contain overwhelming quantities of sugar, salt and carbohydrates.

However, one of the great e-mails I received came from Scott and concluded by saying:

“Have a positive attitude on this paleo diet!  Your prediction that you are going to be miserable will come true if you believe it!”

Having said all that, I really do have a very positive attitude toward the experiment and I’m actually really looking forward to it. I’m not at all concerned about slipping back because I know you’ll kick my arse up hill and down dale and then probably even back up the hill again if I do.

So I was right to be reprimanded, but on the other hand this is a classic case of do as I say and not as I do, and as the resident Guru around here I’m allowed to do that.

I’m kicking off my uStream ‘Ask The Life Coach’ sessions again for the first time in over a year. I’m not sure how often I’ll run them, but it will probably be monthly or twice monthly and the first one is this Wednesday 4th August at 7.00pm.

I’ll be happy to answer any questions you may have on Life Coaching, NLP, self development, synchronized swimming and even the current Paleo/Primal experiment. I hope you can make the time to join in and I’m not leave me sat here like here like a Muppet all on my own.