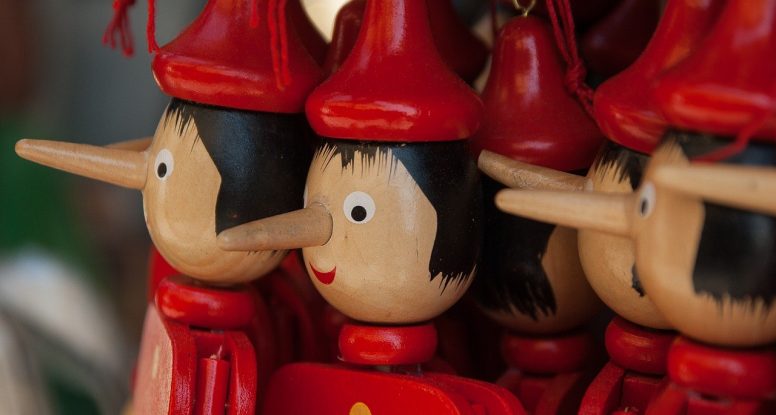 Don’t Believe This Lie Just Because Others Do

The salesman walked into the room to start the presentation knowing things would go horribly wrong.

He stopped still whilst tugging the jacket of his manager in an almost juvenile manner to stay with him.

The manager stopped and looked accusingly at him almost spitting out the word, ‘What?’

‘I’m not ready to do this Mark, I am in no way prepared to demo this product to experts when I was only introduced to it two days ago’

His manager glared at him, ‘Just get it done you’ll be fine’ and with that he turned and walked away taking his seat next to the CFO of the business that was looking for a new payroll service.

The sales person could feel the sweat on his brow, his stomach turn and his face flush.

He stood there momentarily looking down at his notes and wondering what to do.

Any choice in the matter was removed when his manager stood up to address the audience of Payroll and HR professionals and to introduce the demonstration, his demonstration.

He was shaking now, or at least he felt like he was shaking and he could definitely feel the saliva in his mouth dry up as his body was in full-on fight or flight mode.

There was barely a place on Planet Earth that he wouldn’t rather have been as he started to talk to the audience whilst launching the live version of the product on his laptop.

Two wrong mouse clicks on the navigation bar sent him into an area of the software he’d never even seen before never mind felt comfortable talking about.

From Bad To Worse

The mild panic turned into desperation as he stumbled over his words and tried to work his way back to the opening screen without any success.

The lights started to spin and an intense wave of nausea hit him like a tsunami rising up from his stomach.

Instinctively he stopped dead in his tracks and put his hand to his mouth in case he vomited.

He could sense the audience staring at him rather than the screen, but by now he didn’t care, he just had to get out of the room.

With his hand still covering his mouth he mumbled an apology and headed out of the room avoiding any eye contact.

A minute or so later he in the bathroom throwing cold water on his face and trying to regain his composure.

He looked down at his hands and could see he really was shaking.

Once they had turned the corner into the parking lot the manager turned to salesperson and said, ‘That was a complete shower of shit’

Even though he wanted to punch him for not listening and for placing him in a situation that he’d told him numerous times that day he wasn’t prepare for, he just meekly uttered the word, ‘Sorry’

Ten years later on and the same person was giving a talk to a group of workers from the Ritz-Carlton.

He pressed his remote to move from one slide to another and asked the room ‘Who knows who this guy is?’

There were amused looks and a few titters that turned into laughs where there really shouldn’t be laughs. Surely a picture of Seth Godin shouldn’t cause just a reaction, should it?

Instinctively he turned to look at the screen to see not Seth Godin as he was expecting, but a picture of a cartoon cow on the screen that was supposed to come much later.

He didn’t panic, he didn’t feel sick and he didn’t blush, he just started to laugh.

‘Nobody knows who he is then? Well no, neither do I so let’s just call him Ermentrude shall we and we’ll see more of the fella later on’

Then without skipping a beat he walked back to his laptop and swapped the two slides and went on to talk about the launch of Seth Godins latest book launch at that time of ‘Poke The Box’.

Of course you know that I was the person giving those presentations, but you may be unsure of why I’m telling you about them, and the reason is this.

I am sick to death of people saying or even intimating that people cannot change because it’s bullshit.

People Can And Do Change

Back in 2004 I was stressed senseless and was developing severe social anxiety to the point of it being debilitating and threatening my livelihood.

I still get a few nerves when I give a talk or presentation, but nothing even close to what I used to be like.

And my stress levels on the whole are a fraction of what they used to be.

And that’s because I have changed.

It hasn’t been easy and I, like everybody else (should be), am work in progress.

However, if you tell yourself you can’t change you can’t because you have a belief system that will stop it happening.

It only needs one person (me, or if you prefer, many of my clients) to change to make the whole concept a bogus one.

People may not want to change, or they may not know they can, but neither of those are the same as not being able to.

The changes you want may not happen overnight and they may not happen without outside help (I have worked with 4 Life Coaches over the last decade), but they can and will happen IF you believe and IF you persevere.

If you have made some great changes in your life I’d welcome you sharing them in the comments so we can help put this great big fat lie to the sword and give people the hope they deserve.