Could You Stand In Front Of A Mirror And Say, “I Love You”? 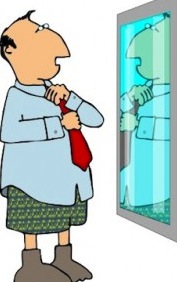 Life Coaches can often get the best results when they don’t shy away from challenging clients (in a non-confrontational way of course) and are prepared to ask questions that may seem plain silly on the surface.

An example: When a client tells me they don’t know the answer to a question such as, “What’s your biggest goal in life?” I will almost always reply with, “What if you did know?”

On the face of it that’s a stupid question because they just told me they don’t know, but as my first book was called “Don’t Ask Stupid Questions – There Are No Stupid Questions” I don’t care what it looks like on the surface, I only care about the second response.

What it actually does is to cut through the mental crap and give the client permission to dream. In other words it ignores the critical conscious mind and appeals to the unconscious.

Like any question, it won’t always work, but it works on enough occasions for me to know it’s worthwhile asking in such situations.

Another question that can get strange responses or even create uncomfortable silences is this:

“Could you stand in front of a mirror, look at yourself and say I love you and mean it in all seriousness?”

How many people do you think say, “yes”.

I’ve no idea how many times I’ve asked it and it’s not something I do on a daily basis by any means, but I can’t remember a single solitary client saying, “sure I could”.

Discomfort, and often lots of it.

That may materialize as indignation, laughter or a melancholy tone to the response, but it’s discomfort nevertheless.  But that’s ok because you cannot expand your comfort zone without feeling any discomfort as you poke your toe out into the unknown.

If you don’t get uncomfortable leaving your comfort zone then you haven’t really left it.

The discomfort is then usually followed up by rationalization.

Of course it’s none of the first four and the answer to the latter is because if you’re not worthy of your own love, who is?

If you want to get a clue as to what you think your self worth is try it out for yourself.

Don’t giggle, don’t make a joke of it, don’t be sarcastic and don’t rationalize it away, just do it.

Go on, I’m serious don’t just sit there do it right now.

What was the response you got?

I have heard everything from crippling guilt, and embarrassment to laughter and outright refusal to even attempt it.

If you think you can’t do it (and it is only a thought because you really can, only your own mind is stopping you), then that’s because deep down you don’t believe it, deep down you think you’re not worthy. I have some news for you.

As I said in my post The Two Secrets To A Happy Life, we’re all good enough. We’re all doing the best we can with the limited information and resources to hand.

Everybody fucks up from time to time, but that doesn’t mean everybody is a fuck up.

If this exercise causes you discomfort, good. That just tells me it’s worth you pushing through. And the great news is I’m going to help you push through the discomfort.

If self love is not a problem for you then thanks for reading thus far and you can be on your way. Unless that is you know somebody who you think could benefit from improving their self esteem, in which case forward it on!

Stand in front of the mirror with your eyes open and say “I love you” out loud.

Listen to your inner voice. What’s it saying?

Is it mocking you? Is it sneering at you? Is it laughing its unconscious head off? Is it telling you to stop being ridiculous and that Life Coach guy is nuts?

Unless the answer is, “Of course you do dude/dudette and that’s because you’re so very lovable” I want you to respond by saying to the inner voice:

And then you say “I love you” again and listen to the response.

It may be well the same, so thank the voice again.

That voice is part of you and that voice thinks it’s helping you.

It doesn’t want you to turn into an arrogant ass or get too big for your boots and this is the only way (at the moment) it knows how to protect against that.

As I said above, we’re all doing the best we can with the information and resources to hand and that is all your inner voice is doing. It doesn’t realize there are other options because it’s always done it this way.

You have to genuinely thank it for trying to help.

Eventually if you persist the voice will get softer and softer and you can say “I love you” with less resistance and you’ll feel better about the most important person in the world, you.

If you are feeling really ballsy you could even leave a comment telling me you love yourself because we need to destroy this asinine belief that self love is the same as being conceited.

*The same goes for situations such as public speaking or asking for a raise at work. if you get nervous and the voice inside your head starts chirping away do NOT tell it to stop being ridiculous because it will rebel even more.

A huge thanks to all of you that contacted me regarding my holiday Life Coaching specials.

The 90 minutes values sessions have sold out and I am going to close the ‘get me for a year at what you think I’m worth (or afford)” offer on Friday 14th at 6.00pm EST.

As of now I have had 6 offers and if I don’t get any more will choose to work with one of those good people.

If you want to throw your hat into the ring, check out what I’m talking about by reading this post.