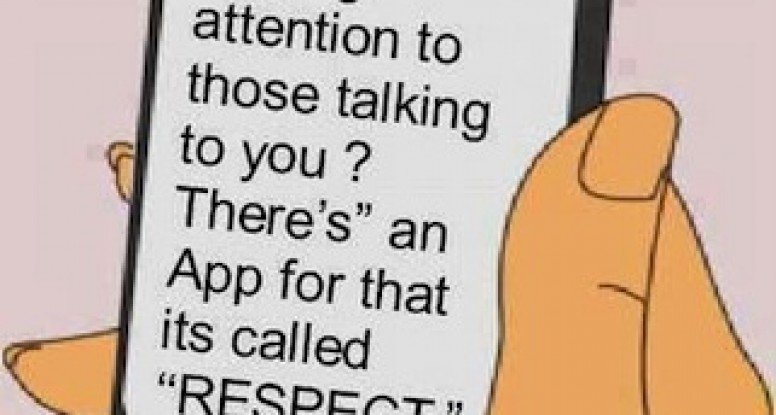 Anti-Social Is The New Social I walked into my favorite Indian restaurant on Saturday evening to pick a meal up to take home.

It wasn’t quite ready when I got there and for a moment I toyed with going out to my car and grabbing my phone so I could check e-mails or play Words, but I resisted the urge.

As I sat down by the door four guys in their late twenties came in looking for a table.

The waitress greeted them, gave them all a menu and seated them at the table next to me.

All four of them immediately dropped their menus on the table and pulled their phones out and started either texting or e-mailing whilst talking to one another.

Be Somewhere Else Now

Ram Das in his seminal book implored us to ‘Be Here Now’, but that message is for the most part is falling on deaf ears.

Edit: Thanks to Kathy in the comments for advising I got the author wrong when I originally wrote John Kabat-Zinn  (hangs head in shame)

For a good five minutes other than an occasional look up there was barely any eye contact made between them.

Not one of them put their phones down for more than a few seconds before picking it up again and starting to type feverishly.

I watched the scene somewhat bemused, it seemed like they all needed to be somewhere, anywhere, rather than where they were.

I’m pretty sure many people of my generation and older would think this type of behavior is rude and anti-social, but I disagree.

Now if 3 of the guys had walked in with an elderly lady and they behaved in the same manner as the poor old soul was struggling to separate her Chicken Vindaloo from her Tikka Masala, then I’d agree.

Anti-Social Is The New Social

What they were doing wasn’t anti-social, it was the new social.

A couple of months ago I was almost at the dog park one morning which is a 6 or 7 mile drive when I realized I had forgotten my phone. What do you think my reaction was?

I’ll tell you what my first response was, it was one of panic.

Before I’d even had chance to consciously absorb the fact that my phone wasn’t with me my brain had triggered the fight or flight response and was alerting me to this terrible danger.

I had even started to slow down so I could turn round and go and fetch it before my conscious mind woke up to the fact I was acting totally irrationally.

It took a few moments for the feelings of anxiety to dissipate and for me to be able to laugh at the absurdity of it all.

But where did that initially reaction come from?

How did I go from being ambivalent to carrying a phone with me, to thinking it was so important that the unconscious thought of being without it would fire up my sympathetic nervous system, which in turn would start producing adrenaline and cortisol to help deal with the ‘danger’.

You have one ability that you almost certainly underestimate because almost everybody does. It’s your ability to adapt to your circumstances no matter what they are.

At least once per week a client will tell me they can’t deal with something, but they always do.

You’re Brilliant At Dealing With Adversity

You yourself have dealt with everything that has ever happened to you because otherwise you wouldn’t be here.

You probably think (unless you have been through any of these things) you couldn’t possibly deal with being diagnosed with cancer, going bankrupt, losing a close family member, getting fired or losing your awesome looks, but you could.

Every hour of every day people deal with adversity the very thought of which can throw us into a cold sweat.

They gain our admiration for being brave and soldiering on and rightly so, but really they are just being human, we’re all born to adapt because the alternative isn’t very appealing.

There’s no middle ground, we either adapt or we die.

Human Adaption Has A Downside

The flip side to this amazing ability is that it’s not a one way street. As we adapt to adversity so do we adapt to things we perceive as positive, like smart phones.

And once that adaption has taken place it’s not easy to step back, even if we know deep down it’s not healthy.

I have started to introduce ways of gradually removing the feeling of needing to be connected all the time.

I now leave my phone in the office rather than having it sat next to me whilst eating dinner and chilling. If I’m just going to do a few quick chores I leave it at home and I no longer take it in to Yoga with me.

Why I was ever taking it into Yoga in the first place is a mystery to me, but that’s what  happens with adaption. Like addiction it creeps up slowly on us in stocking feet.

The ADD/ADHD Pandemic Has Landed

I regularly hear clients tell me they suffer from either ADD or ADHD (usually self diagnosed).

Yet 8 years ago when I started coaching I’m not even sure if I knew what it was, and I certainly didn’t have clients convinced they were suffering from it.

The inability to concentrate and focus is developed largely because we are constantly trying to multi-task as well as either thinking about the future or pondering the past.

This trains our brain to be constantly flicking back and forth looking the latest shiny metal object.

The irony is that it’s a physical impossibility for all but a tiny margin of the population to multi-task effectively, yet most people persist in trying.

Suddenly the now many people are experiencing is not good enough unless they are texting about it to somebody who isn’t there, uploading pictures of the event to Instagram, or videoing it to watch later.

After all, why watch, enjoy, and be in the moment now, when you can tape your life and watch it at a more convenient time (whilst texting a friend about it of course).

There’s not much of a point to this post other than for me to ask you one question.

How do you feel when you go completely offline?

If your answer is anything but number 1, then maybe it’s time to slow that adaption down and take control of your life back.

What do you think?